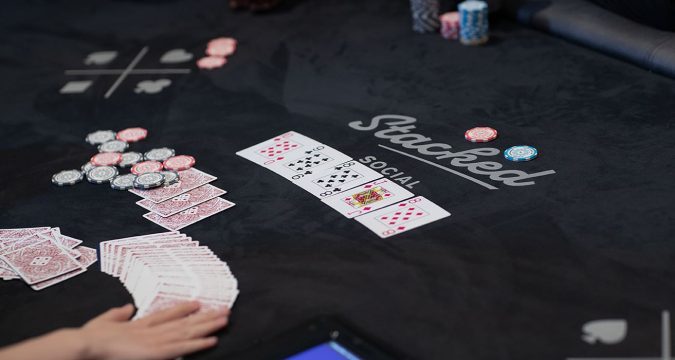 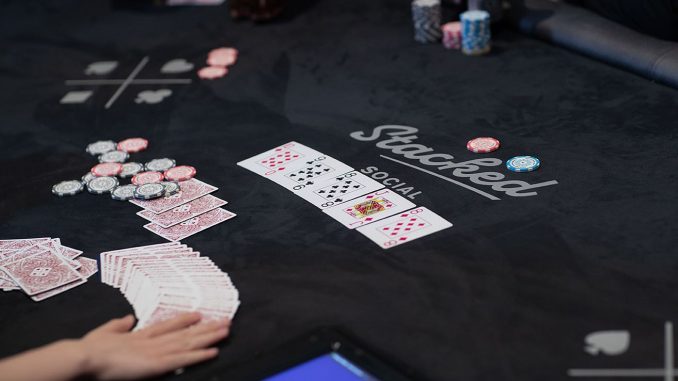 Following the major final hand of the night, Chris Edgar has double-bagged a huge chip count. A margin of almost 1.4 million separates him from next best, Weng Wong.

Starting the day with 50 players, a few more entrants bought in to Day 2 after not having played any of the Day 1 flights, this includes Wong, who excelled as the day continued.

At the close of registration, a round of applause was had for achieving the record number of entrants for any Stacked tournament, and the prize pool of $273,715 was excitedly revealed.

Two players from our previous series’ Main Event FT also feature, including Adam Cusenza, as well as defending champion, Joe Sandaev. Sandaev has had a 2022 to remember, adding to his trophy cabinet with four final table appearances at WPT Australia Gold Coast, which resulted in two victories and also the player of the festival honours.

Final Table coverage will begin at 4:00pm SADT with each elimination being brought to you as it happens right here at pokermedia.com.au. 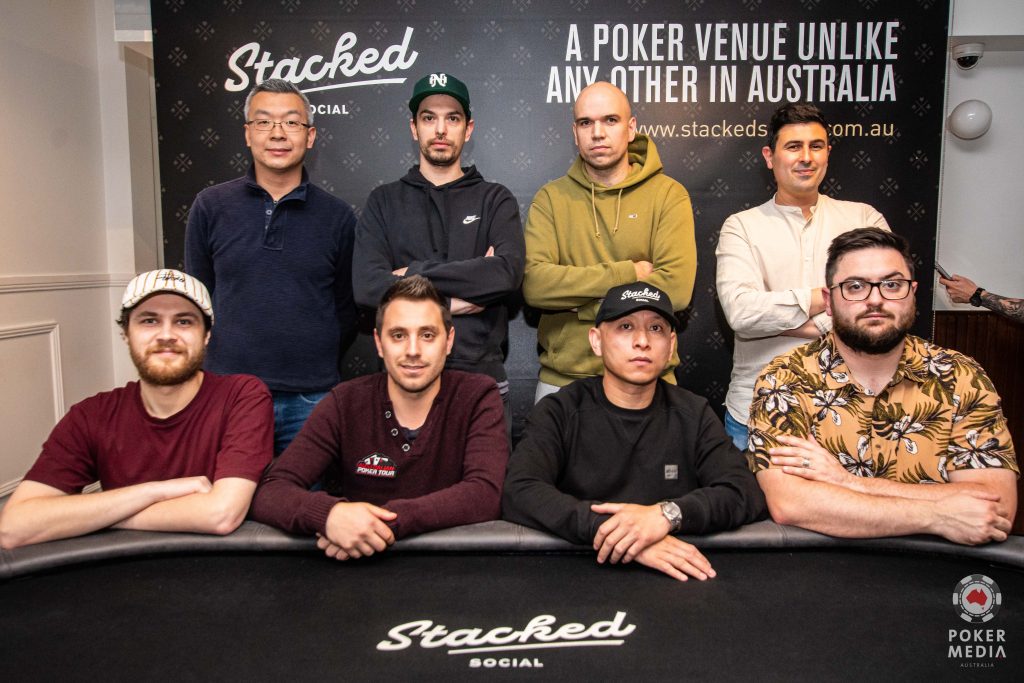 Trouble with a double bubble

Hayden Russell had announced all-in on Table 2. Not realising this, Evan Tsirgiotis attempted to complete from the small blind for 30,000 total, he verbalised call and placed an additional 15,000 into the pot.

Understandably an accident, having not heard the all-in declaration, it was unfortunate for Tsirgiotis. Though, Russell clearly pushed his stack forward and the dealer immediately presented the all-in triangle in front of Russell.

Tournament directors enforced the black-and-white ruling that both Tsirgiotis’ verbalisation of “call”, as well as him placing chips in front of him, was binding and that Tsirgiotis had to match the bet.

To make matters more complicated, Chris Edgar moved all-in over the top, now requiring Tsirgiotis to put his entire stack at risk to see a board. The call was made and two players were at risk against Edgar.

That sealed the deal and we now have our final table! 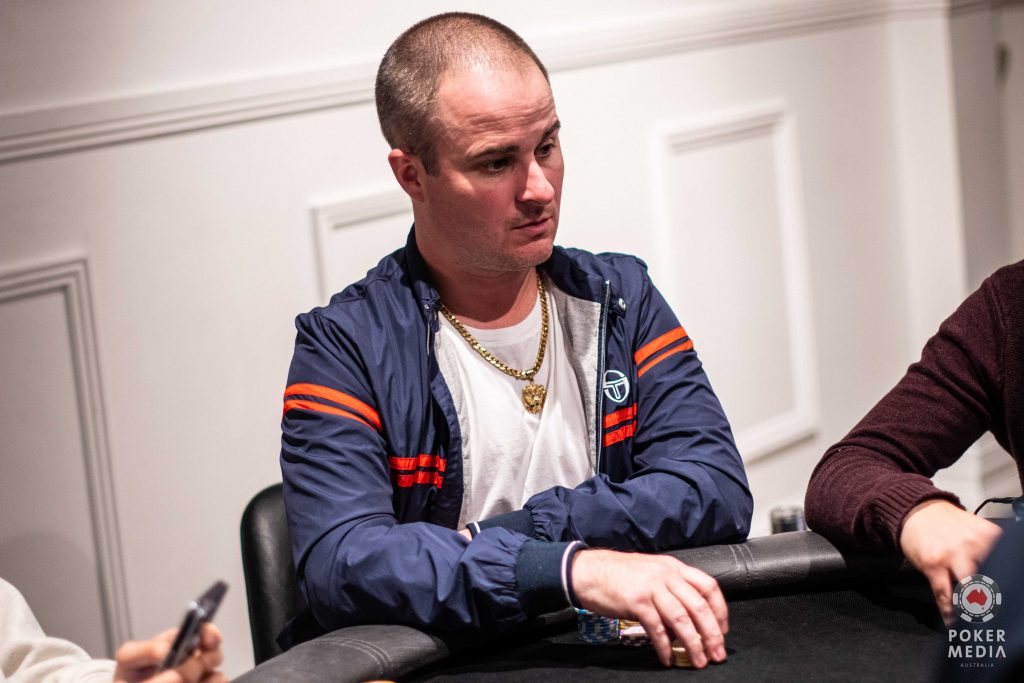 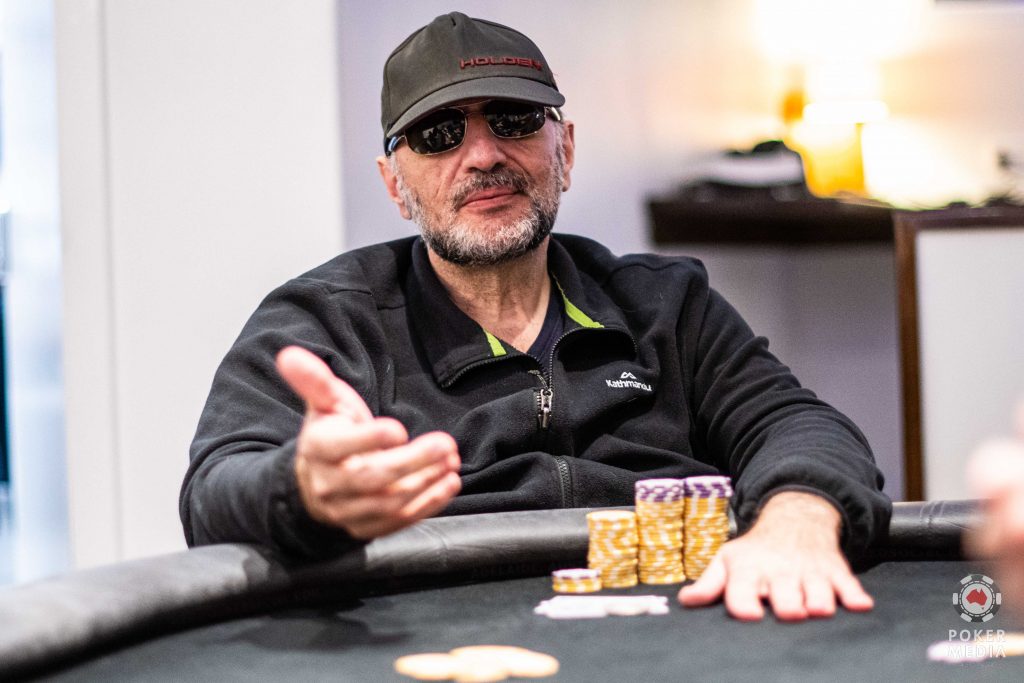 We are now on the bubble for the Main Event Final Table, with Weng Wong eliminating Jarred Graham.

Wong opened to 65,000 and Graham defended his big blind. Both players checked to the turn on a board that showed Q♦Q♣5♠7♠K♦.

Graham checked the turn and Wong fired a delayed continuation bet of another 65,000. Graham moved in for only 120,000 in total and the two went to showdown ahead of the river.

Graham’s pair was second best to Wong’s trips and we have our top 10!

An all-in from Adam Cusenza from UTG for 210,000 was called off by Scott Calcagno on the button. A tough decision then had to be made for Calcagno when Pip Chea moved all-in for another 530,000 on top from the big blind.

Calcagno agonised before folding, leaving the two to battle it out.

Cusenza gained a contextually huge double-up to overtake Chea in the chip counts. 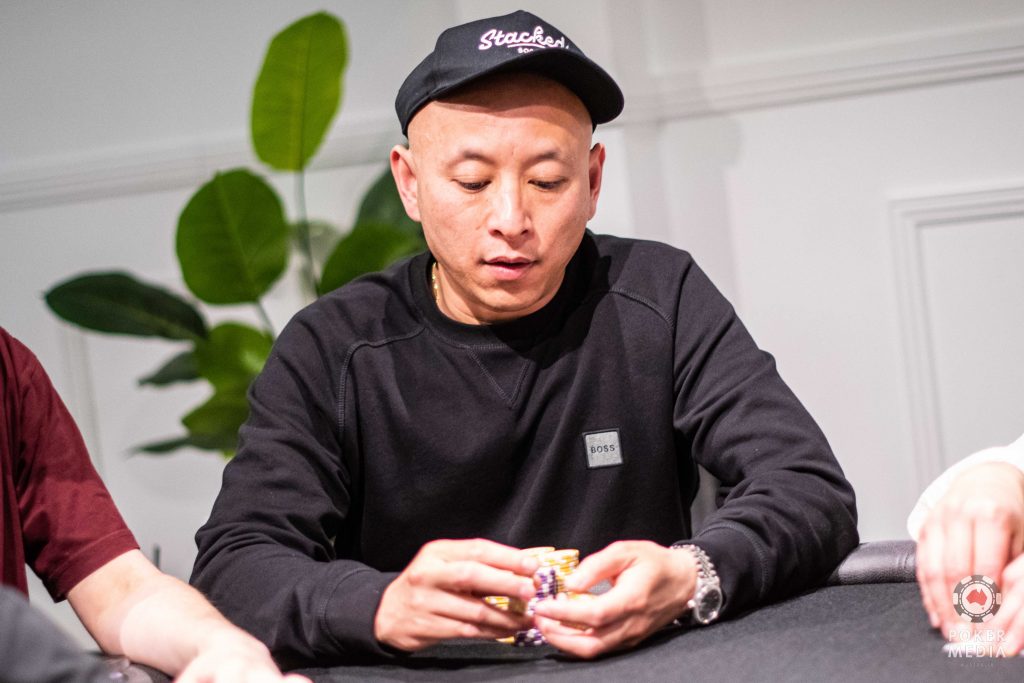 Prior to the knockout of Frank Pezzaniti in 12th place, others to go were Chris Parker and Armon Van Wijk.

Parker fell victim to a three-way all-in preflop that resulted in small triple-up for Pezzaniti that briefly kept him in the game before his eventual demise.

Parker finished in 13th, and Pezzaniti was eliminated in 12th. 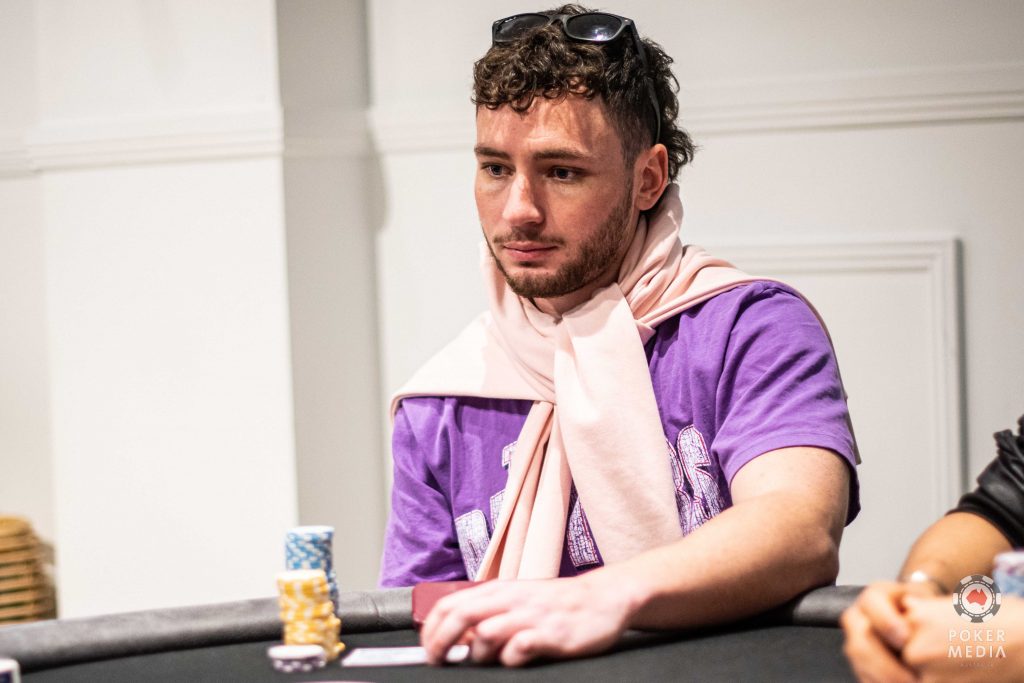 A crowd began to gather around Table 3 as action crescendoed to hearing “all-in, call.”

For a split second, it was believed Pezzaniti won on the river, but the four-card flush sealed the double up for Sandaev. Pezzaniti would be eliminated shortly after when his 7♥7♦ couldn’t improve against Scott Calcagno’s K♥K♦ on 6♠9♣6♥J♦9♠. 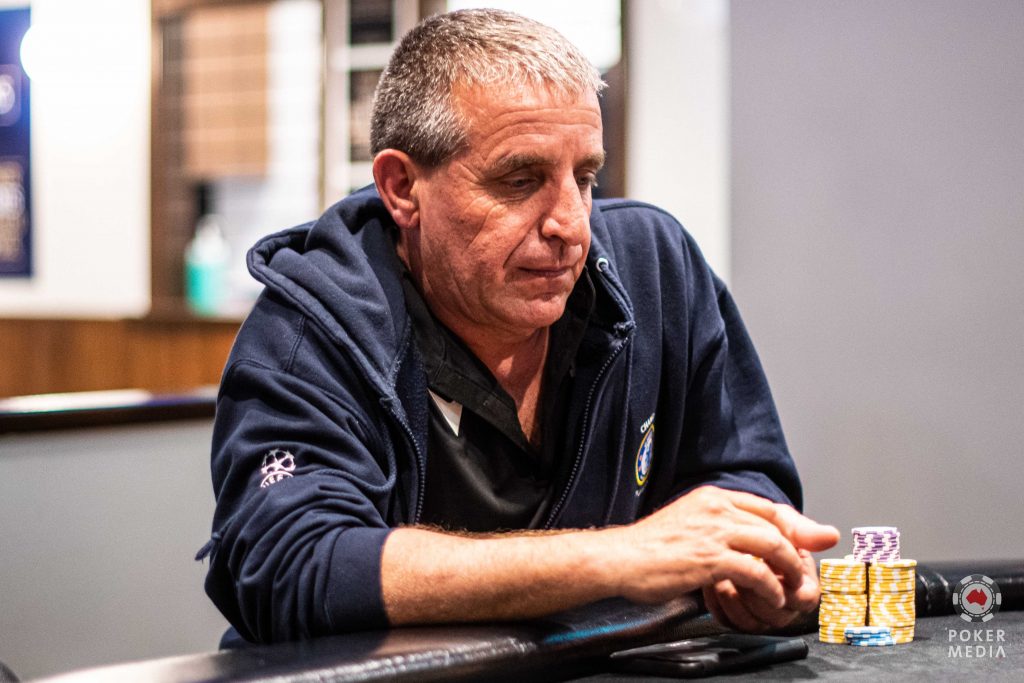 Lionel Seah has lost his chip stack in exchange for a 15th place payout of $4,100.

Damiano Aloi once again is responsible for giving the rest of the field a ladder. 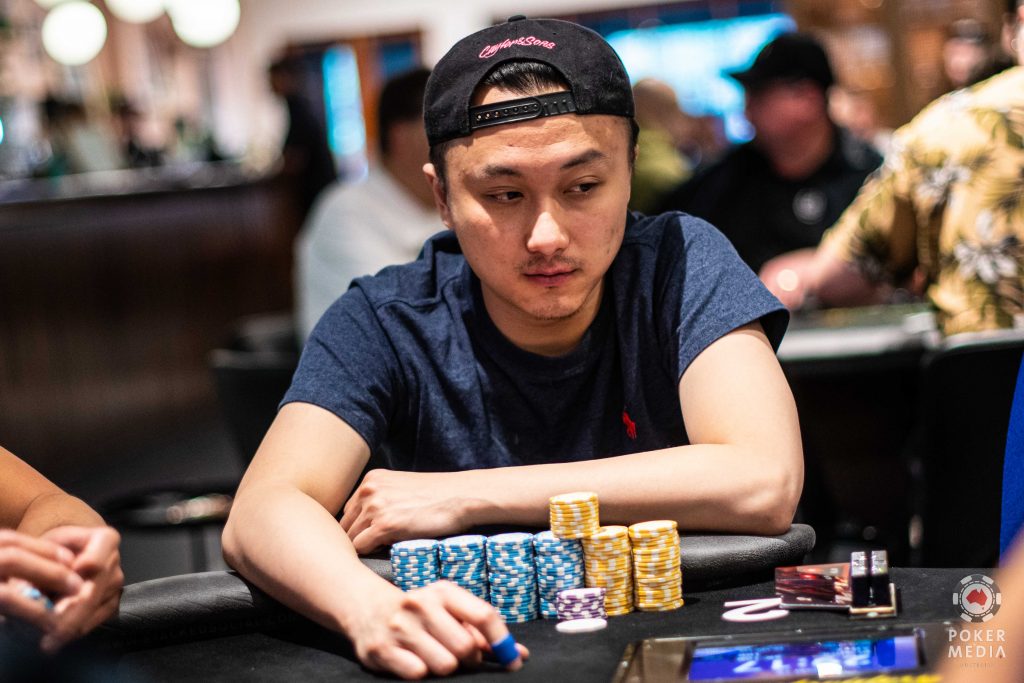 Does anybody know what it means? Regardless, it’s fun to say. Just ask Pierce Hynes, our latest bust out in 16th.

After re-entering multiple times in the space of a few minutes at one stage early on Day 2, credit must be given to Hynes for his ability to switch into gear when there are no second chances, carrying a large stack throughout the majority of the Day 2 levels. 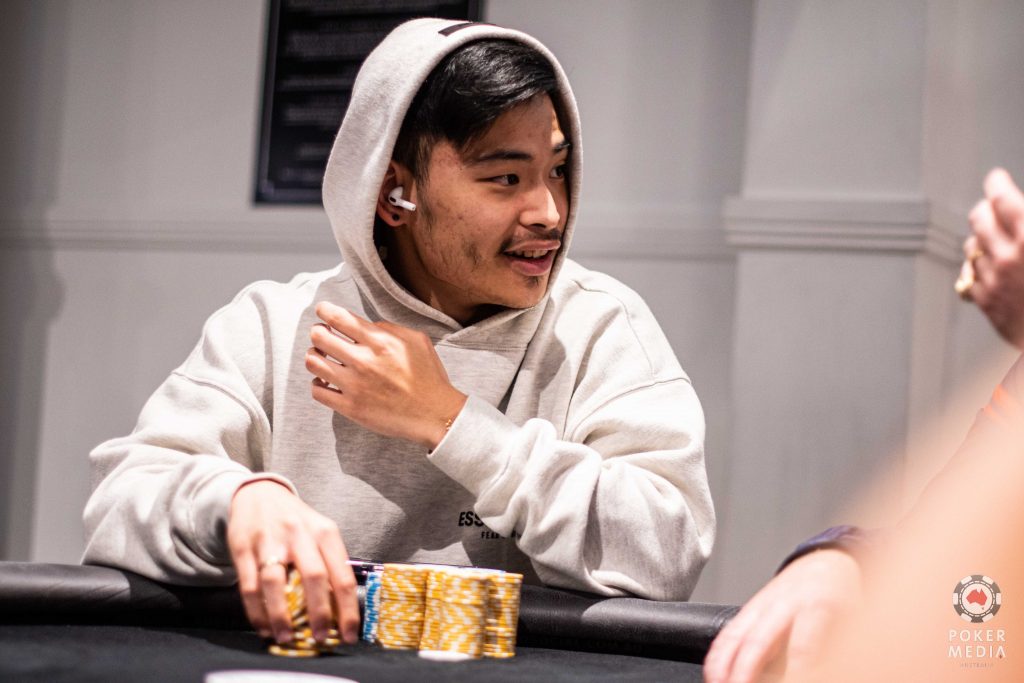 Scott Calcagno has effected another elimination, his A♦3♦ spiking top pair on a board of A♥Q♠Q♥6♦9♣.

Although ahead preflop, Blake Deussen’s 4♠4♦ couldn’t recover after the flop, confirming his departure in 20th place. 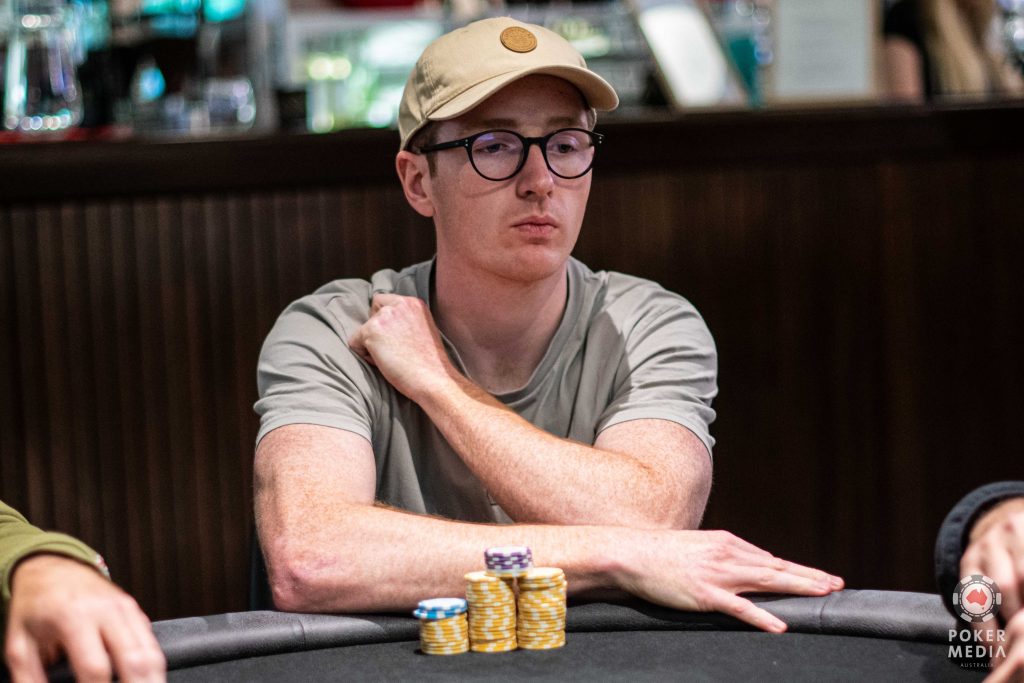 Billy “The Croc” Argyros, in full crocodile attire, has had his main event come to a close in 21st place. 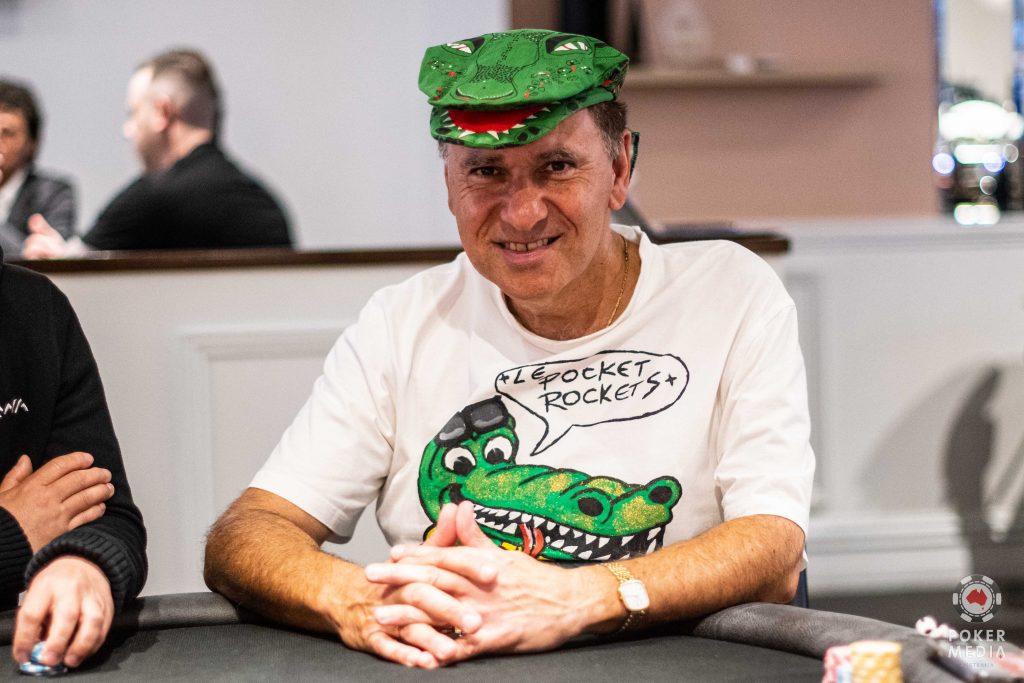 Two knockouts have taken place in quick succession upon reaching the money.

Bok was first to go, placing in 24th for the min cash after getting involved from the big blind with 6♥4♦.

On a flop of 6♣9♦3♠, Damiano Aloi moved all-in, covering Bok who made the call with his middle pair.

Aloi turned over 5♣7♣ for the double-gutshot draw and nailed it as the runout followed K♠,8♠. 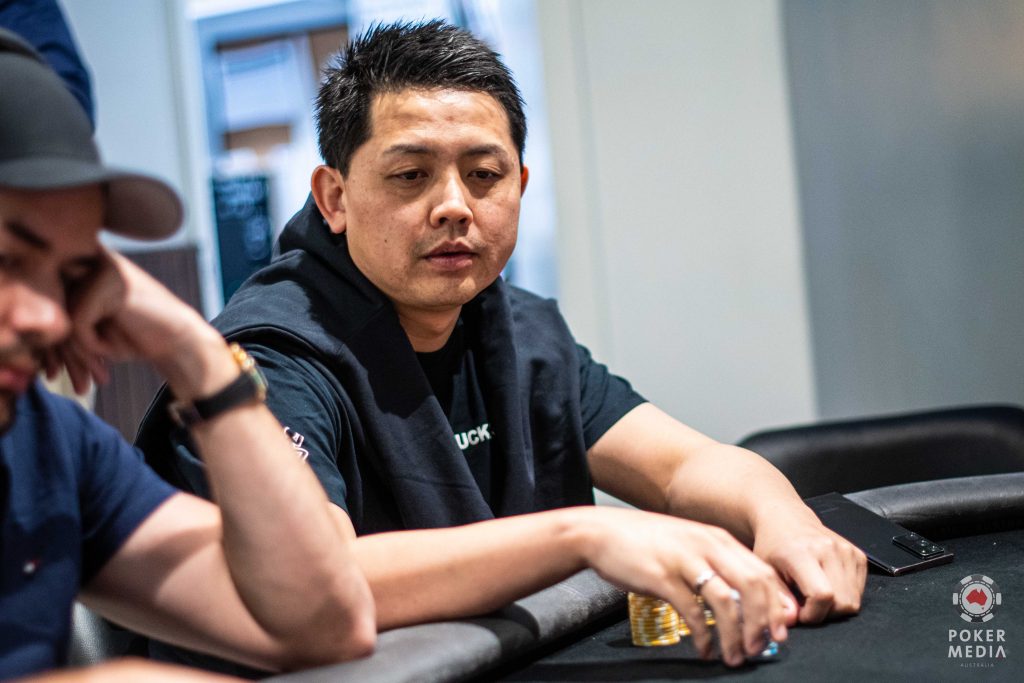 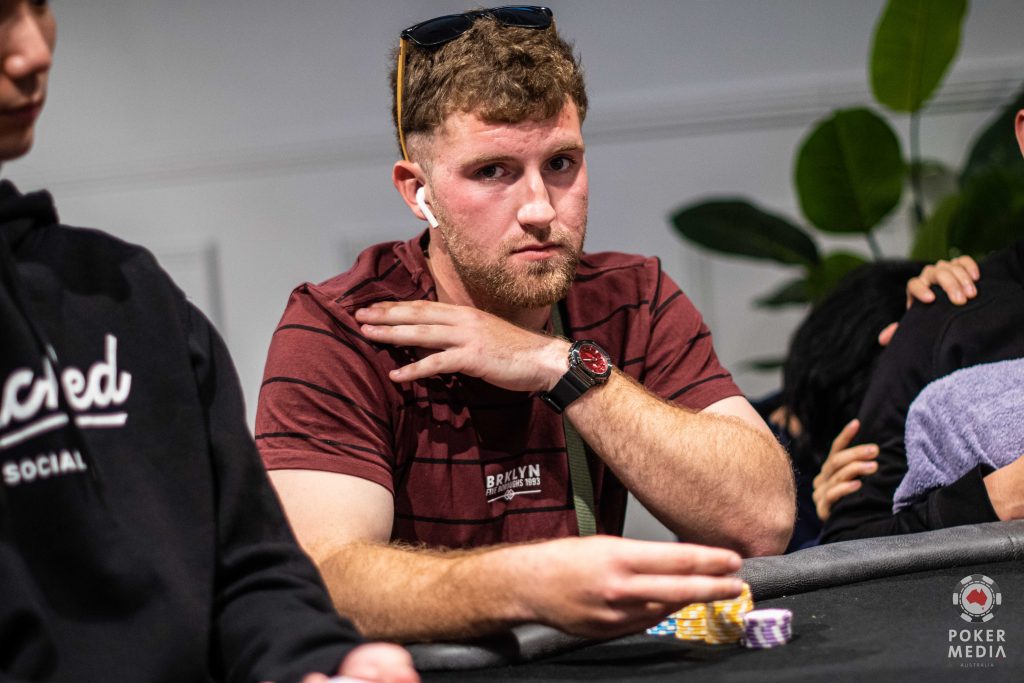 Emanuel “Curly” Seal has unfortunately found himself as the bubble in our Main Event. Falling in 25th place thanks to Scott Calcagno. 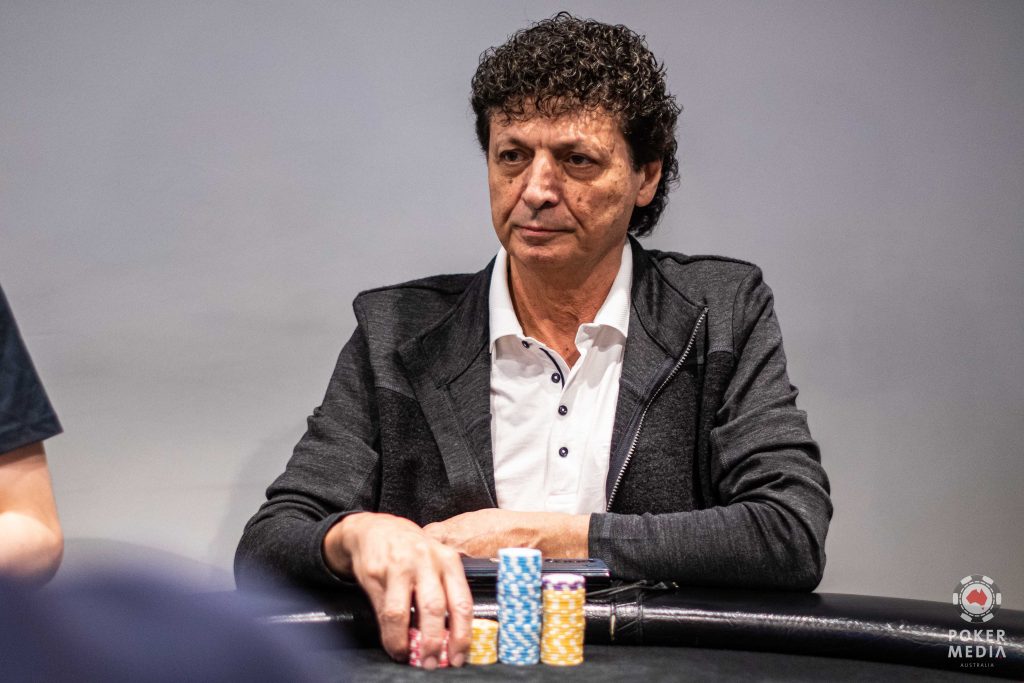 Our 26th placed player was Oliver Daly, moving all-in with A♣9♦.

Joe Sandaev made the call with A♠K♦, and maintained his pre-flop lead through to the river on Q♥K♣3♣3♥3♦. 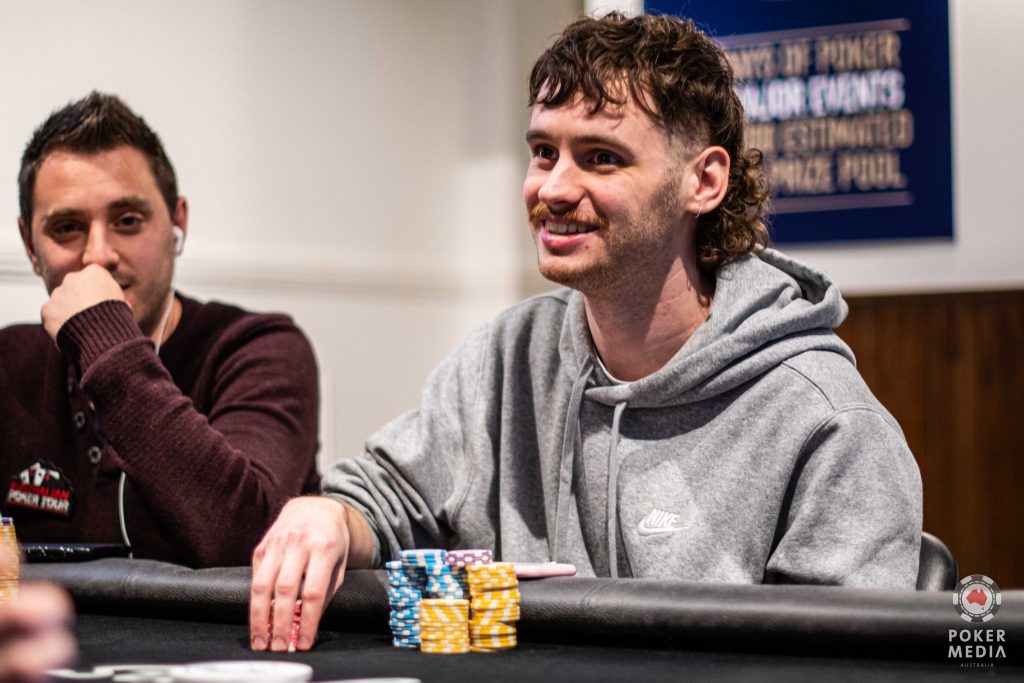 Jacyn Che has fallen out of contention at the hands of Scott Calcagno. 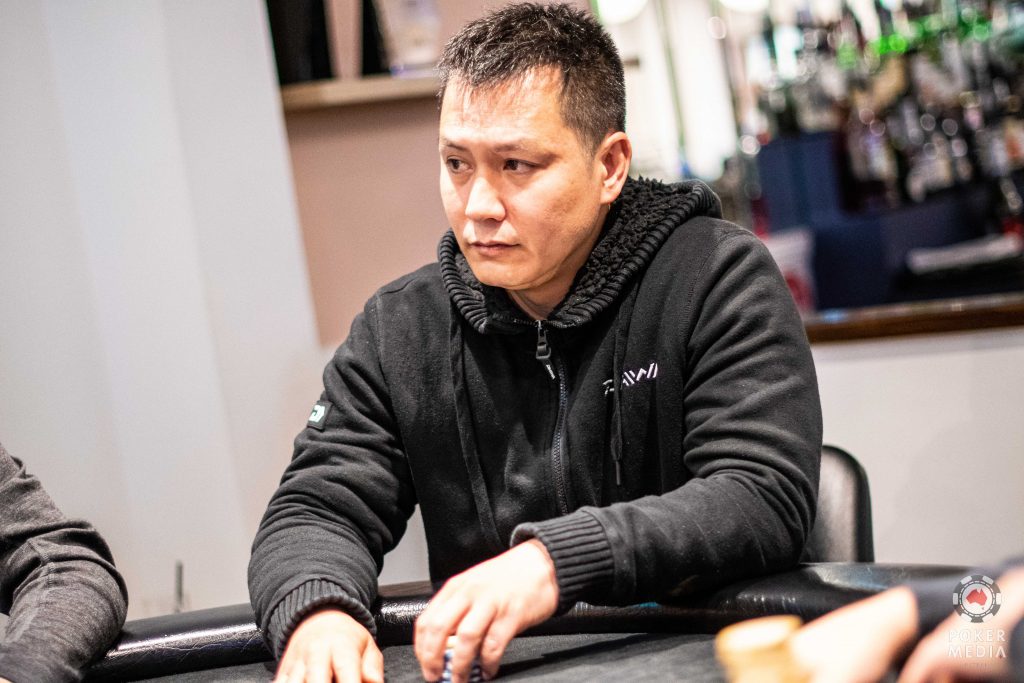 Blake Deussen has hit a set at the right time to eliminate Gavin Best. 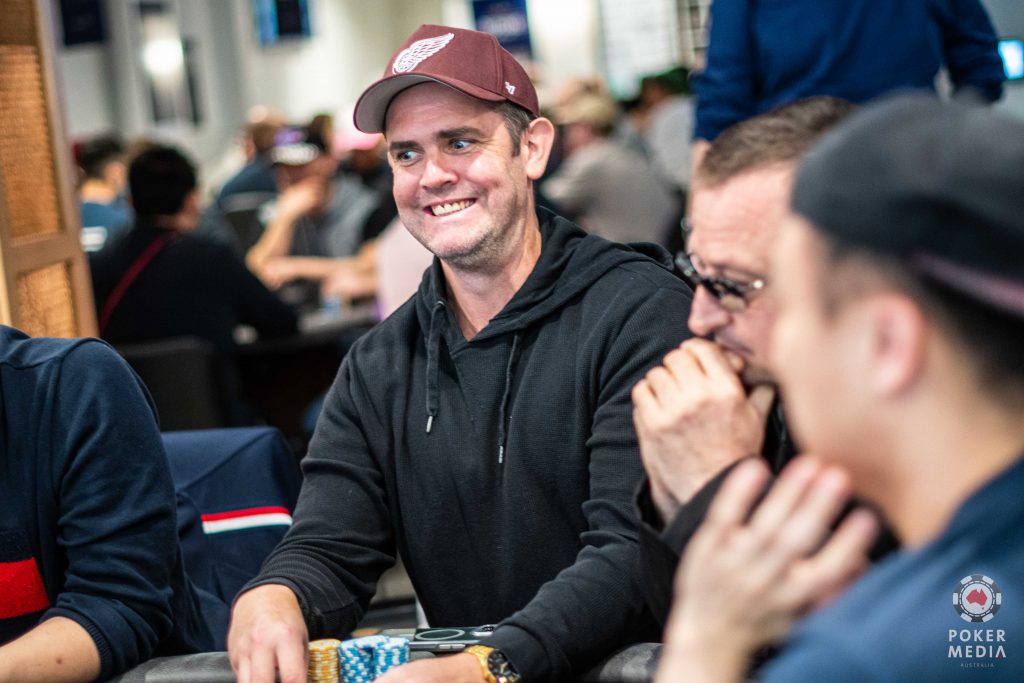 We didn’t want to spoil this hand in the headline, it’s just too incredible.

What a crazy runout, leading to a huge noise in the poker room. We can only imagine the reaction if the board came out in the reverse order! 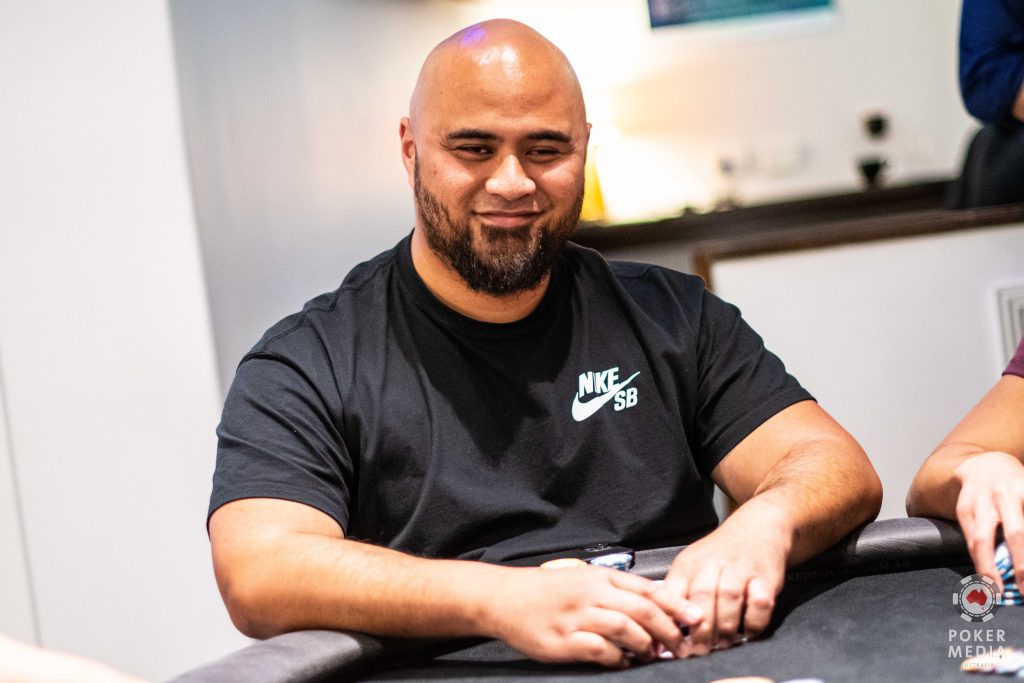 Some four way action took place on Table 3, with Chris Parker, Pip Chea, and Joe Sandaev all limping in to a pot where Billy Argyros elected to raise to 30,000 from the big blind.

All three other players called and saw the flop come 4♥7♠8♣. All checked to Chea who could have closed the action to see a turn, but elected to fire 65,000 into the middle. All folded, and when prompted to “Show the bluff”, he turned over K♠J♥. 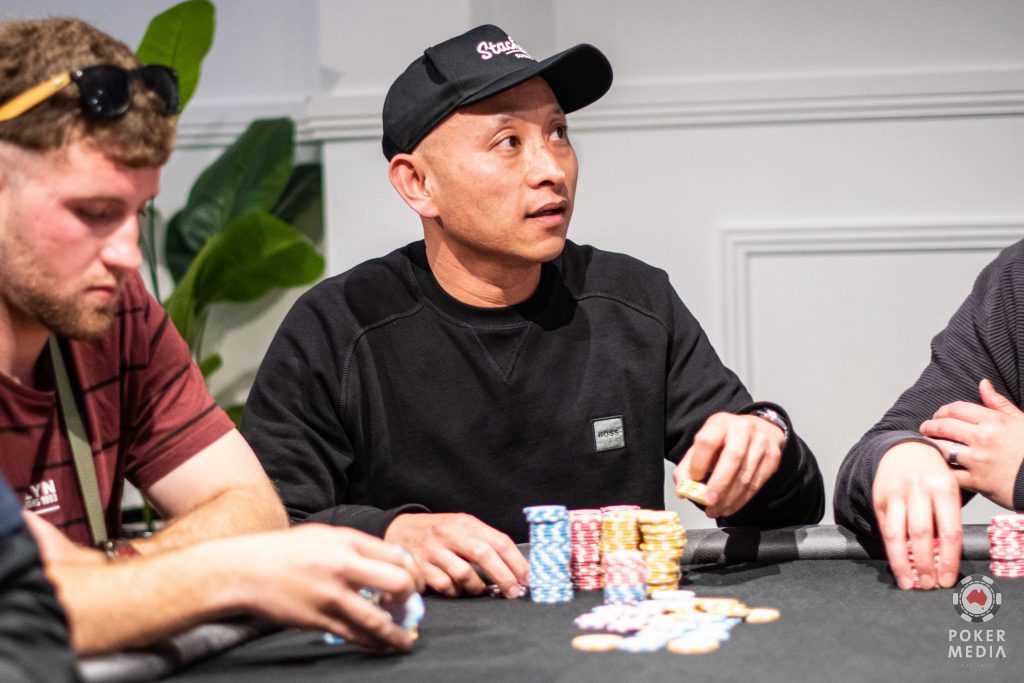 No go for Joe

In amongst a fantastic series, it was a brilliant surprise for the Adelaide faithful to have been graced with the presence of Australian Poker Hall of Fame inductee, Joe Hachem.

Surviving Day 1A to bag for today, Hachem couldn’t find much traction, before hitting the rail after a rollercoaster final few hands.

Nick Williams jammed Q♦5♣ and was called by Hachem’s A♥8♥. The 4♦5♥9♣5♦9♥ runout got worse and worse with each card for Hachem, who was left with a decimated stack.

Shortly after, Hachem’s K-Q managed to river a King against two other players, each with an ace in their hands, to spike a triple up.

However it was short lived, as Hachem moved all-in once again and his A-3 was called by A-6. Any hopes of a chop were dashed as the board displayed both a Two and and a Four to ensure Hachem’s opponent’s Six played. 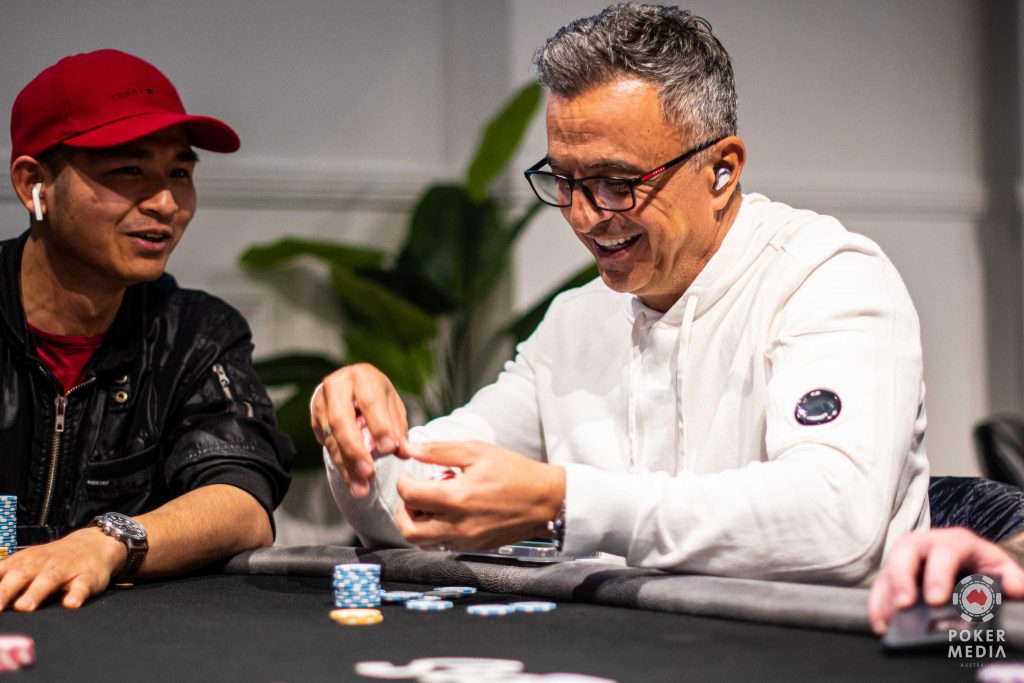 Chris Parker found himself on the right side of a flip against Neb Blanusa. 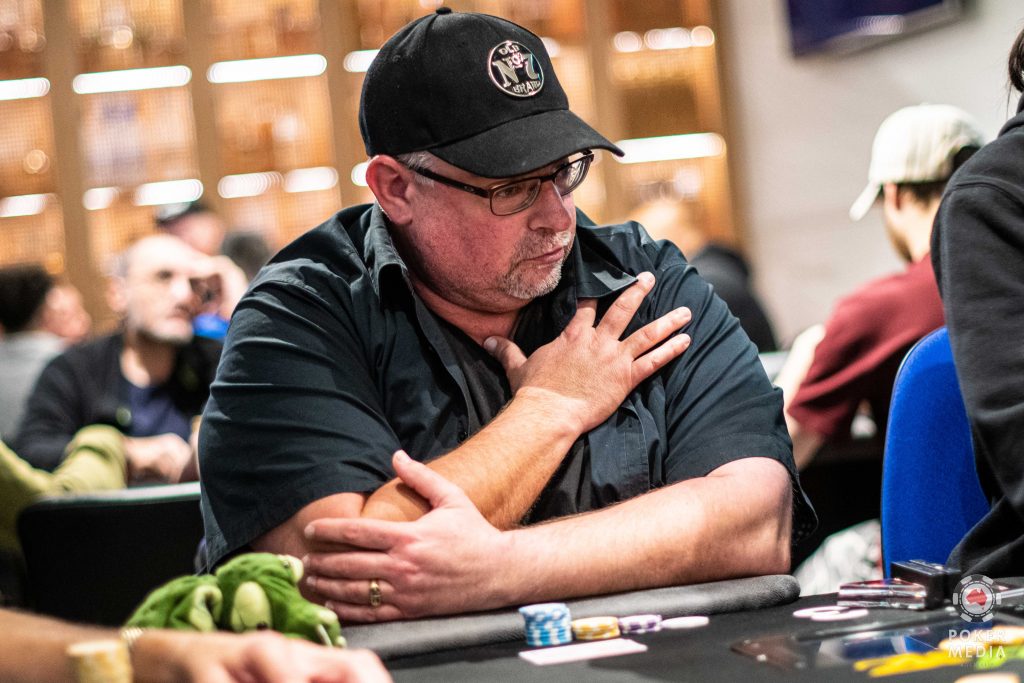 Romes built in a day

Roman Priplotski got all his chips in the middle pre-flop with 7♥7♦, against an opponent’s 9♥9♦.

Starting to retreat back in defeat as the flop came J♥Q♠6♥, tablemate Bok encouraged Priplotski to use his ‘one time’.

Priplotski muttered, “I’m not feeling it.”

The turn brought Priplotski one step closer to elimination, with the 3♣.

In a sudden burst of energy, Priplotski exclaimed “seven!” 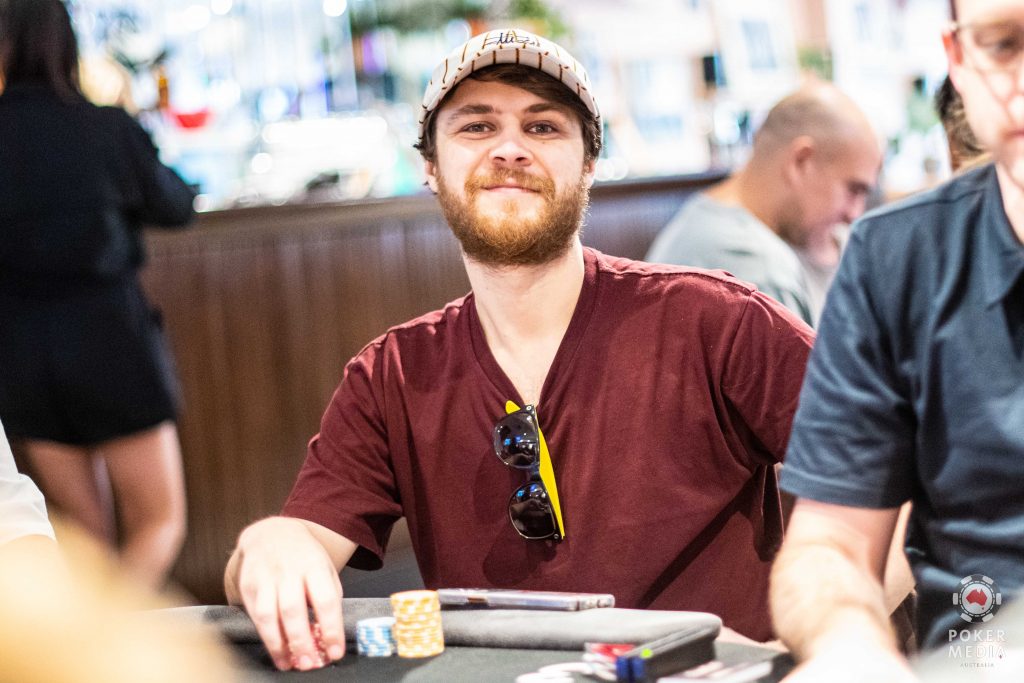 Stacked Social Managing Director, Andrew Michael found an opportunity to boost his stack, finding himself ahead pre-flop amidst a three-way all-in against Gavin Best and Gary Lin.

The short-stacked Best claimed the main pot, whilst Lim’s lucky river handed him the side pot and a scalp to go with it. 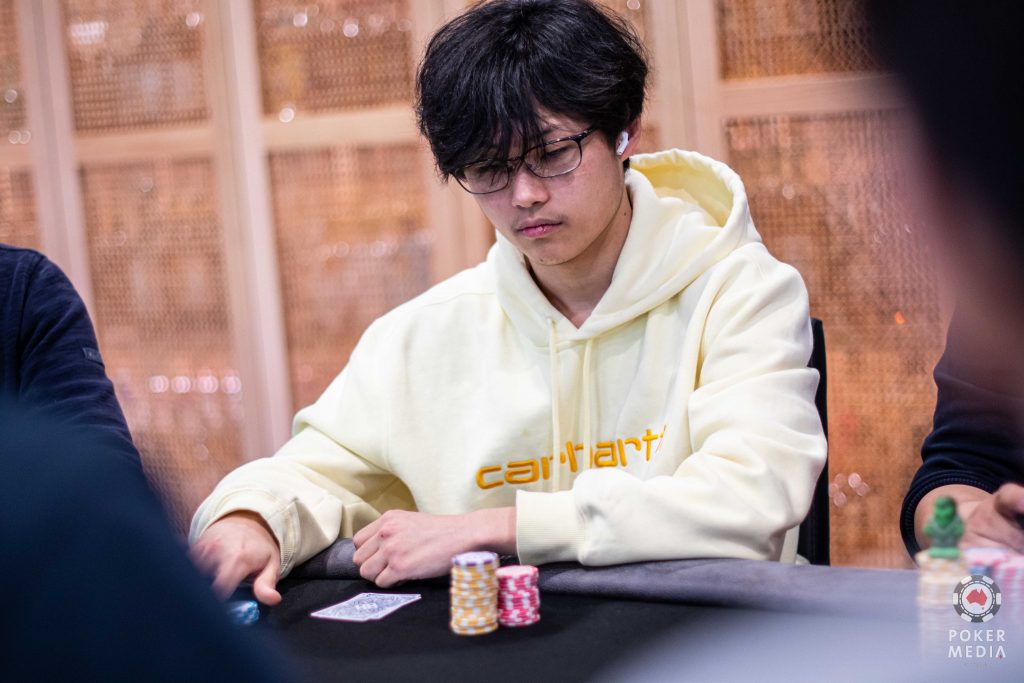 At the start of level 15, we have 52 runners remaining at the close of registration.

A final total of 192 entries has been confirmed, breaking the turnout record for any event here at Stacked Social, what an amazing achievement! 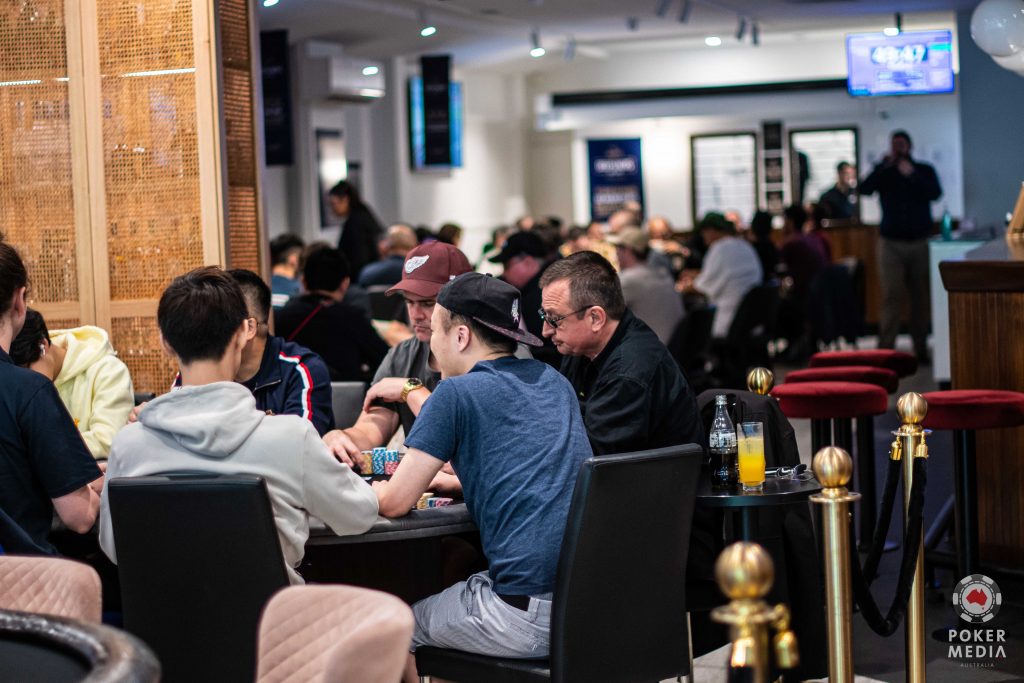 Ace-Queen would work for Carpenter

Action begin with Best moving all-in for a total of 35,000, Alex M re-jammed for 80,500 which sent Carpenter into the tank, having both others covered, and eventually calling. 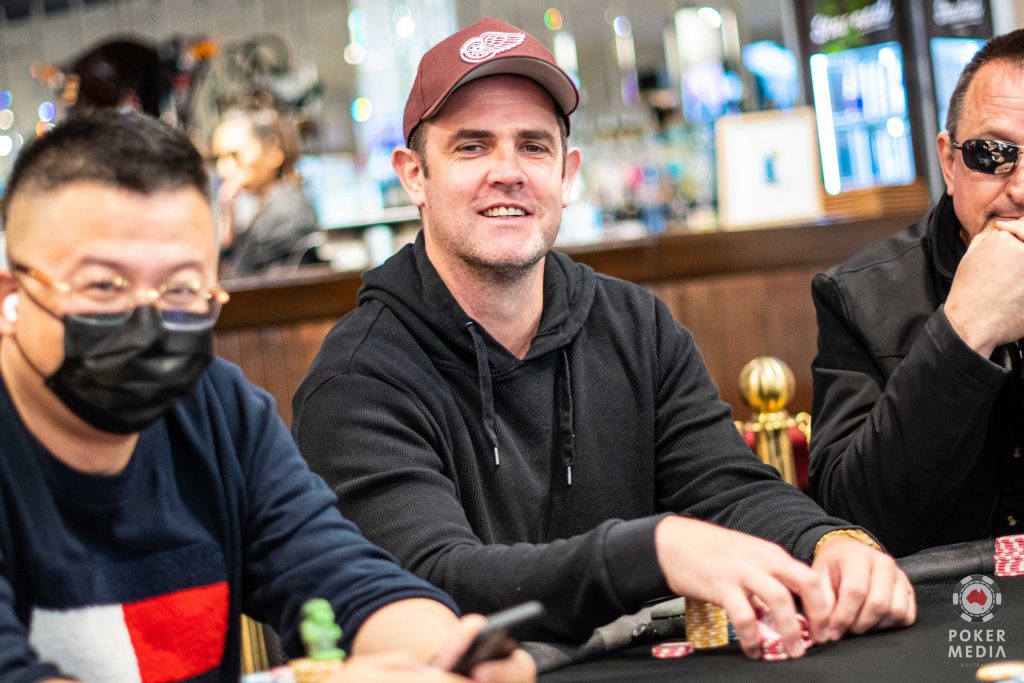 Damiano Aloi had his tournament life at risk early on Day 2, when his A♠J♠ went up against the A♥10♣ of Chris Tika.

The A♦4♦A♣ flop was huge for both players, but Aloi maintained a lead.

The K♣,J♦ boated up Aloi’s hand to give him a much needed double-up. 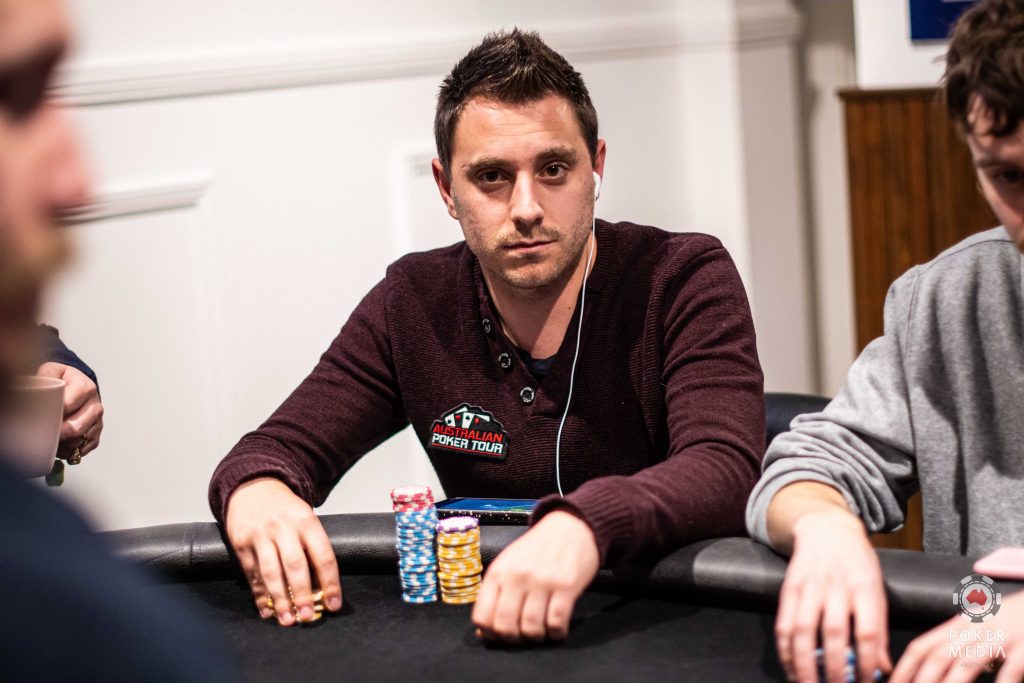 Who can get a double? Tin can

Tin Win was barely nestled into his seat after entering the tournament for the start of Day 2. With a fresh 50,000 stack seated in the small blind, he opted to jam over the top of an Armon Van Wijk open. 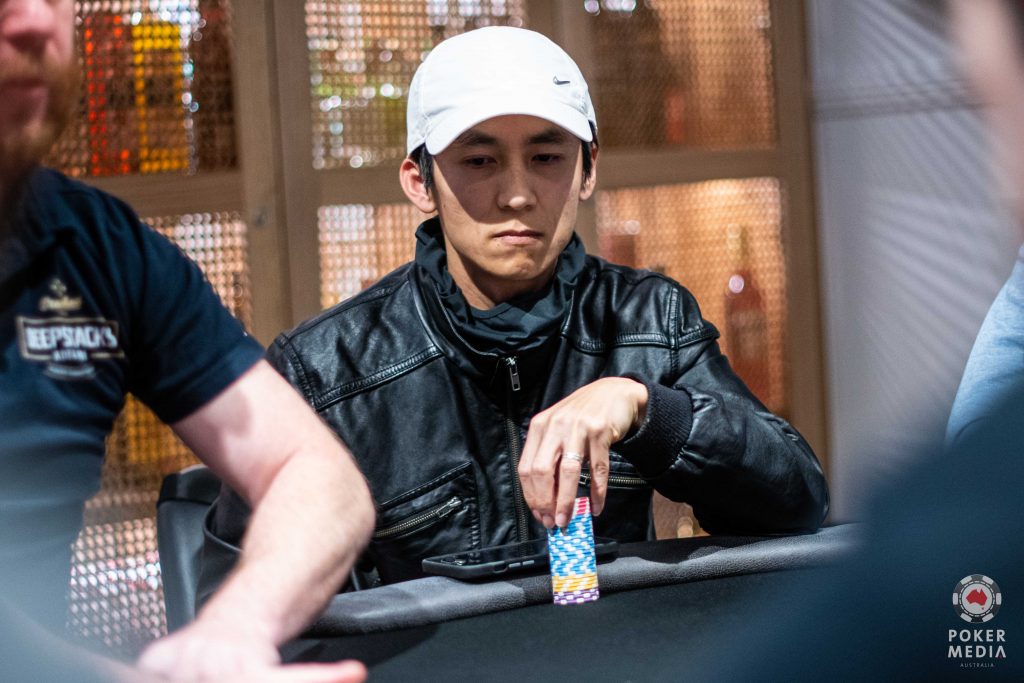 Hello and welcome to PokerMedia Australia’s continued coverage of the Stacked Social DeepStacks Main Event. The culmination of survivors from flights 1A, 1B and 1C have gathered across six tables for the race to the final table.

53 runners will play down to the top nine today, and until then, we’ll have all the action covered!